I am so grateful that computers hadn’t already found a permanent place as an appliance in our life and household during most of my early childhood—and smart phones certainly weren’t around. If they were, they probably looked and felt like bricks, and computers, well, at one time, probably looked like modern pipe organs. If you did have one in your home, you didn’t need a desk. You needed to build an additional room!

What I am grateful for are manual typewriters, and they were still hanging around throughout my childhood.

My first official introduction to the manual typewriter came in high school, when, thanks to my parents, who had drafted me into College English, I had to write, and type, two term papers, one five to seven pages and the second ten to fifteen pages; the regular English class only required one term paper, a mere five pages long. Needless to say, the manual typewriter “was not” my best friend, nor writing. 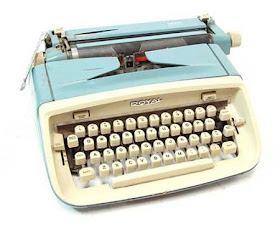 The manual typewriter I had to use was a Royal typewriter. It hand been handed down to me by my father, well, it was there to be used. My mother had bought the typewriter as an engagement present for him who really needed it for college.

Of course, I didn’t see the sentimental value of the typewriter. To me, manual typewriters meant work. It was manual labor. Using them was probably the equivalent to making license plates in prison or placing shirts into automatic folding machines like Woody Allen had to do in Take the Money and Run.

In 1992, I discovered writing the traditional way, in college, where writing, surprisingly, had then gone from work to recreation. I began to use the manual typewriter more and more—occasionally in the college library I would use the sadly soon-to-be-extinct IBM Selectric typewriter with its magical silver ball and super sensitive keys if it was available—and it usually was—to type papers that were due that day or minutes before class. Somethings never change.

I don’t remember when exactly it had happened or who had suggested it, but they were surprised that as a writer I still used a manual typewriter and did not use a computer or word processor.

Of course, change is hard, and is probably why we don’t like it, forcing us out of our comfort zones.
I continued writing with a manual typewriter.

Now to be quite honest, computers had made it into our home before they had found a permanent place as an appliance in everyone else’s home. My father, a high school math teacher, had brought us an Apple II computer home from work then later on he had bought us a Commodore 64, complete with a 5 ¼-inch floppy drive and a dot matrix printer, but we, mainly my big brother and I, did not utilize the computer for educational purposes, which my father had hoped for.

For us, the Commodore 64 was an exciting new video games counsel, a major upgrade from the Atari 2600, and with the floppy drive, we pirated as many computer games as we could—even rigging the disks so that we could save games on both sides.

My baby sister was the first one to type a term paper on the Commodore 64, but we, certainly I, hadn’t paid much attention to what she was doing.

Years later, my big brother bought a PC from Sears, but that, too, equipped with dual floppy drives, was mainly used for video games.

Finally, in, I think, 1997, when I realized I enjoyed writing enough to know I’d be in it for the long haul, I borrowed $200 from the Bank of Grandma to buy a PC with a fast 80286 processor, no mouse, no Windows. It ran a program called Professional Writer. It was Heaven, white text against a sky-blue background.

I began using Professional Writer, and from that day forward, it had changed everything for me as a writer. Sadly, as a fiction writer still learning the structure of storytelling, I never returned to the manual typewriter, wondering how I had ever gone without a word processor.

With the word processor there were magical tools like spell check and cut and paste. I could take a sentence—a paragraph—even an entire page—highlight it and drag it up and down and across pages, without yanking out a single page in sheer anger and frustration from a manual typewriter and having to go through the hassle of typing it all over again. It was a process I remembered all too well in high school when, as Last-minute Matt, I had to pull an all-nighter to finished a term paper, missing the school bus and having to chase it down several stops later.

But all that said, with all the technology that the word process had to offer, I realized it still didn’t—and it still couldn’t—write the paper or manuscript for me. Yes, even though things like spell check and cut and paste were nice, it couldn’t write the story for me.

If I had to step into a high school classroom and talk to students about the profession of writing, and a student were to ask me what they thought would be stupid question: Do you need a computer to be a writer? I’d reply in rapid fashion, “Absolutely not!” In fact, I’d have to be careful not to forbid it!

Again, computers are wonderful tools for writers—for advanced, professional or accomplished writers, but for writers just starting out, the most efficient and effective way to learn how to write is to use a manual typewriter. The road to becoming a proficient writer goes through the manual typewriter.

Computers cannot slow you down like manual typewriters can, and what I mean by slow you down is that computers do not allow us to think our thoughts through before we type them out, unlike computers that make it way too easy not to—I’m speaking more to the folks who type their thoughts directly into the computer.

Computers can be bad for the thought process, allowing us to form the bad habit of not thinking our thoughts through. We know that we can instantly delete words, sentences, entire paragraphs, even entire pages with the touch of a single key. It’s way too easy! Writing is rushed on a computer, and you know what they say about folks who rush in.

Once you’ve gotten into the habit of thinking through your thoughts and are able to go back and check the math of your story, it might be bitter sweet, but you are ready to graduate from a manual typewriter to a word processor, which then becomes a wonderful tool for real or true efficiency.

Remember. Whether you’re using a manual typewriter or a word processor, you are still only typing, not writing, and there is a big difference between writing and typing. A computer can’t write for you, only make bad writing look good on a neatly typed page, which you won’t get away with once it’s read.

When you write, slow down, think your thoughts through, and in the end, it won’t matter which tool you choose, a computer or a manual typewriter, you’ll save a whole lot of time and paper. A computer can’t help you a whole lot if you don’t know how to write. Yes, a computer may be able to tell you if the sentence you’ve written is a fragment or not, but do you know why it is a fragment? If you don’t, sadly you are at the mercy of the computer.

I still have the Royal typewriter I began my journey as a writer with. Sadly, it’s stored in its case in the attic, but one day, when my income affords me the time to, I’m going to get it out and type out an entire manuscript on it—all 350 pages of it. No, it’s not an Underwood, the typewriter that screenwriters typed screenplays with in the good old days of black and white films, and I don’t own one, but, typing on my father’s Royal typewriter is just as sentimental, maybe even more.